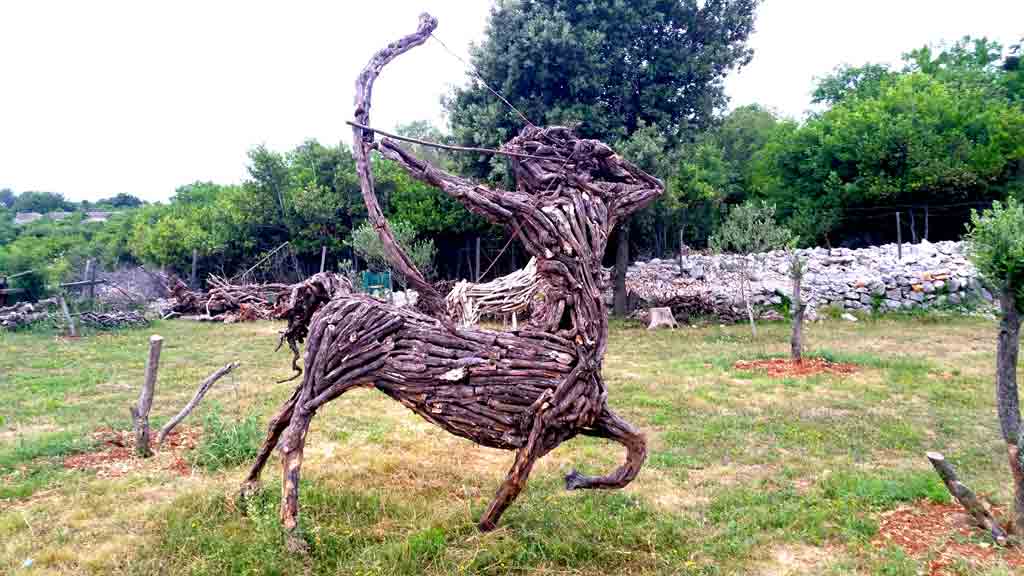 Beautiful Sculpture Park Arteco on the island of Krk, near the town of Krk. 5 brothers, all artists present their sculptures made from old olive trees and various nut trees directly in their natural products!

In Krk there is an open sculpture park where members of the Arteco Association from Mali near the Slavonski Brod took part. The park was summer in the summer near the Danube. Since the interest and the visit was as good, more, and this year their interesting and original creations publicly exposed, but this time in another place, in an olive grove at the place “Droskulo” at the exit of the city Krk in the direction Punta of The right side of the street, About the panoramic restaurant.

The Association Sculpture Park “Arteco” consists of a group of amateur artists, including five brothers Pavletić: Zoran, Zdenko, Zdravko, Danijel and Marin. They are a special way to access creation, exploring the chances of the tradition offered by the countryside, without using wood – mostly remains of grapevines, olive trees and beeches, but also collected sediments that then translate into impressive sculptures and installations. What makes this strange outdoor setting even more interesting is the successful synergy with the island landscape while respecting the ecological principles, but also the specific character of the ambient.

Creative from “Artec”, or an association founded to promote amateur artistic creativity and ecological thinking and behavior, stand as inspiration for their creations of natural beauties that are surrounded with the aim of establishing a balance in the relationship between man And reach nature, which justify their minds. The art of living with nature!

The opening of this gallery was attended by the representatives of the Princes of Krk Frankopan, led by Prince Mikula IV and Duchess Dorotea, along with their entourage, knights and archery. Two horses from the Konjički klub Njivice were special attractions. After the deceased Mantinjas of two Johns cousins, the opening ceremony was conducted by the personal master of Mikul IV, who had been Peter Kopanica for several years.

First, the present President of the Association “Arteco” Zoran Pavletić, who thanked everyone who made this exhibition possible, especially Vojmir Raguzin, which they ceded the country, to the gallery.

Art historian, Magistrate of Science Jasna Rodin expressed great pleasure to be present at the opening of this art park. Auspicious olive tree, juniper, vines and the debris in their hands becomes a valuable sculpture, becoming a real artistic clip to its originality, authenticity and beauty attracts our attention – said Rodin.

After visiting the exhibition, the Pavletić family showed that they are not only excellent artists, but also that they make an excellent Slavonic actor with whom all participants are honored.

We recommend that you visit this exhibition, which can be visited until the end of September, usually between 10:00 and 20:00.

Entrance fee € 3, – / person (21 Kuna), welcome with a slivovic, photography allowed, the artists explain their sculptures in your country language.